Home → Learn → Are you attracting the best audience?

Are you attracting the best audience?

Note: This is a reprint of a previous Emergent Marketing Newsletter. If you're not receiving our email newsletter, you can subscribe here.

NOTE: — If you were in our MMS launch loop last week, you would have missed a “shadow newsletter” we stealthily sent to everyone not part of our MMS launch. So, if you missed it, you can read it here. (We each shared a few books and resources that have consumed our attention this year we think you would enjoy.)

I've muscled the keyboard from Shawn for this newsletter because I want to reflect on lessons learned building an audience over 15 years.

And the implications of some of those mistakes have revealed themselves only now, a million years later in internet years.

To this end, Shawn has inherited those past indiscretions. Together, we've recognized the same activities will not attract the audience we need to serve as we race into 2022 (and years beyond), having bundled all our courses into a single unified product, the Modern Marketing System.

Change, after all, is a companion we all need to live with.

We can accept change, ignore it, fight it — but as with gravity, it's invisible, but its effect is felt everywhere.

In many ways, future André is writing this email for the André of 2006, roughly when he started to build this email list of followers.

I wish I had this email 15 years ago to give me some perspective.

But, more importantly, this email is for you — because: you need an audience in order to have a thriving, durable business.

No audience, no business. It's not rocket science.

But not just any audience…

An audience that will grow with your business years into the future.

Hence the framing question in the subject line of this email: Are you attracting the best audience?

It's a question meant to interrogate your assumptions.

I thought I knew the answer to this many times in the past.

But, as I'll unpack in this email, I didn't, not entirely.

I'll start with a proposition I think no one will disagree with.

The same can be said for prospects, of course, but because we're all in the (happy) customer business, I'll focus only on customers. None of us are in the non-customer business. (At least not for long.)

An audience is a group of people with a shared worldview…

All of us see the world through “filters,” and it's these filters — beliefs, biases, nested value structures, expectations we have about the world and our future, etc. — that shape and color our subjective reality; our worldview.

At the level of abstraction that matters when thinking of this definition of an audience, we're only looking at psychographics (our psychological traits).

Some people have deeper pockets than others.

Some people have desperate needs or intense desires they'll move heaven and earth to meet or satisfy.

Others have superficial needs and lukewarm desires.

People with the highest levels of dissatisfaction, who refuse to settle for mediocrity, are more motivated than people satisfied with the status quo.

There's a spectrum of people that broadly represents all of us…

… Maslow's theory of motivation, subconsciously expressed in our emotional behavior responsible for varying levels of anxiety and unhappiness that can move our hearts and motivate action for change.

No single trait is good or bad in isolation…

We are all subject to the human condition of biases…

All this is to say, the world is a chaotic mess of people who broadly overlap in weird and unpredictable ways.

Imagine, if you can, billions of dots, each representing a uniquely (dysfunctional) human like us trying their hardest to live their best expression of a happy life. 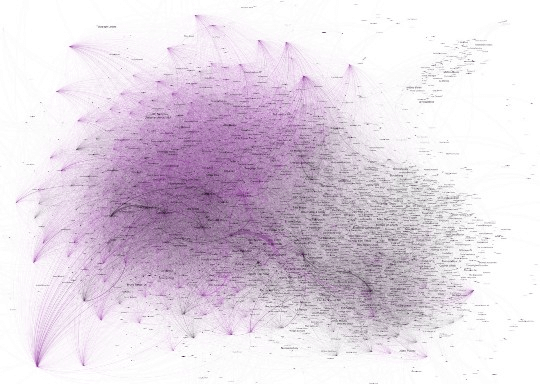 These tiny dots cluster around diverse and narrow topics of interest colored by our lens on the world and our place in it (our worldviews).

People shift in and out of these invisible groups that match their needs, desires, and worldview.

None of us exist within a single interest silo.

We're diverse, like Frankie, a vegan, plant-based advocate and eclectic hairdresser from a borough of London…

Covid almost destroyed her business (with payroll to meet for people she cares about).

When Frankie's not working on a plant-based recipe book she hopes to self-publish by Christmas, her attention is focused on leveling up her advertising chops on Google and Facebook.

Frankie's attention is broadly drawn to self-publishing, plant-based living, and wanting to get better at advertising her hairdressing salon on Google and Facebook.

Like Frankie, Shawn has diverse interests, as do I.

I've built a racing simulator and race competitively on it…

I'm a student of modern marketing, and I'm constantly working to improve my craft across my diversity of interests.

(I spend a lot of money in these diverse interest categories.)

It's our job as modern marketers to find the signal in the noise and parse out groups of people who most likely represent worldviews that match our best audience profile.

People who desperately need and want what we have, have the means to pay for it and at a volume that's viable for long-term growth.

When I was still green around the gills, one of the first books I picked up was Positioning: The Battle for Your Mind by Al Ries and Jack Trout.

I still have the paperback. It's probably the most lent-out book I own, battered and dog-eared, belying the value within.

Positioning starts with a product, which can show up as a widget, a service, a digital course, a company, or even a person.

But positioning is not what you do to a product…

Positioning is what you do to the mind of the prospect related to your product and the value it can bring to bear for the prospect.

One of the primary levers of positioning is pricing.

(In late 2011 or early 2012, I wrote a lesson on positioning I had included in ARM2, which is still accessible here if you fancy reading it. It's weird reading what I wrote a decade ago. Weirdness aside, it's a short, fun read.)

I had been curating an audience for a few years. But this was the first time I had codified my expertise into a guide to sell.

With $97 selected and scared of what would happen (what if no one purchases?), I applied a quantity limit of 100 to the offer.

If I remember correctly, I shut the cart down within an hour, with people bursting in while I tried to pull the order button down. (You can see in the screenshot 102 people came in.)

There were lessons to learn — three obvious ones:

Firstly: $97 was too low. The perceived value far exceeded what I was asking people to pay. (The 46.8% conversion rate a giveaway!)

Secondly: It was dumb, really (really) dumb, to apply a 100 unit limit on a digital course. (Don't do that, oh god, please never do that!)

Thirdly: The name (another factor of positioning). I mean, who adds “Madness” to the name of a legitimate course?

I was in Las Vegas some years later in the private suite of Ryan Deiss, and Perry Belcher was laughing his head off at the name I had thought was smart. I had no comeback.

I was 0 for 3 in the mistakes column for my first foray into selling a digital marketing course.

With lessons tucked under my belt, a year later, ARM2 had no quantity limit, I had doubled the price to $197, but the name had stuck. (It wouldn't be until 2021 that we would change the name to Art of Email.)

People will gladly pay a premium price for whatever you're selling if they honestly believe it is significantly better than the alternatives.

For me, the alternatives were considerably more expensive than ARM.

Perry Marshall, for example, was selling his autoresponder course for between $895 – $4,895 (Bronze, Silver, Gold).

If I was paying attention and had considered asking myself why Perry was charging so much more, I may have noticed a lesson hiding in plain sight.

(If you've read my positioning article, I was selling the equivalent of a Nespresso machine, Perry a JURA.)

Consequently, ARM blew up — thousands of customers purchased in the following years. I was a genius.

But I wasn't, not really.

An audience with the means to pay thousands per year for marketing advice. His best audience realized early.

Perry was smarter than me back then.

The implications of all these decisions would only reveal themselves years later.

Sometimes it's impossible to read the label on the bottle when one's hustling on the inside, not stopping to read the tea leaves.

Through my unintentional low-price positioning, I had curated an audience that reflected a group of people who broadly responded to relatively low-priced offers.

Ryan Deiss and Perry Belcher gave ARM some mad love from the stage at Traffic & Conversion Summit, 2012. Through that unexpected exposure, I earned the attention of an entirely new audience.

I gradually raised prices and focused on the best prospects only.

Each time I was slightly adjusting the type of people I was attracting.

But I continuously operated within a positioning “category” in the mind of the customers I was unintentionally resonating with. (Oops!)

An audience with the means to pay thousands per year for marketing advice. Perry's best audience realized early.

Business is the ultimate school of learning.

Early on, the audience I was attracting was into a version of affiliate marketing I had become very good at, where I shared freely, personally, and regularly.

Then I sidestepped into the role of digital course author (having externalized and codified my best thinking), attracting an audience wanting what I had, and at the price I was positioning it at.

Each time I was exposed to other people's audiences, I attracted an ever more segmented audience, people with diverse needs and interests, people who responded to different prices, people with varying levels of sophistication.

Our TLB audience is an assortment of people attracted into our sphere of influence over 15 years years.

We have new people fresh on their journey, hungry to capture their first dollar.

We have old grizzly veterans in our fold.

We have people who seek world-class free information but don't have the guts, burning desire, or levels of dissatisfaction to motivate action.

We have businesses in the 6 figure range…

If the lessons in this newsletter haven't been explicit enough, I'll summarize them like this (see illustration below). 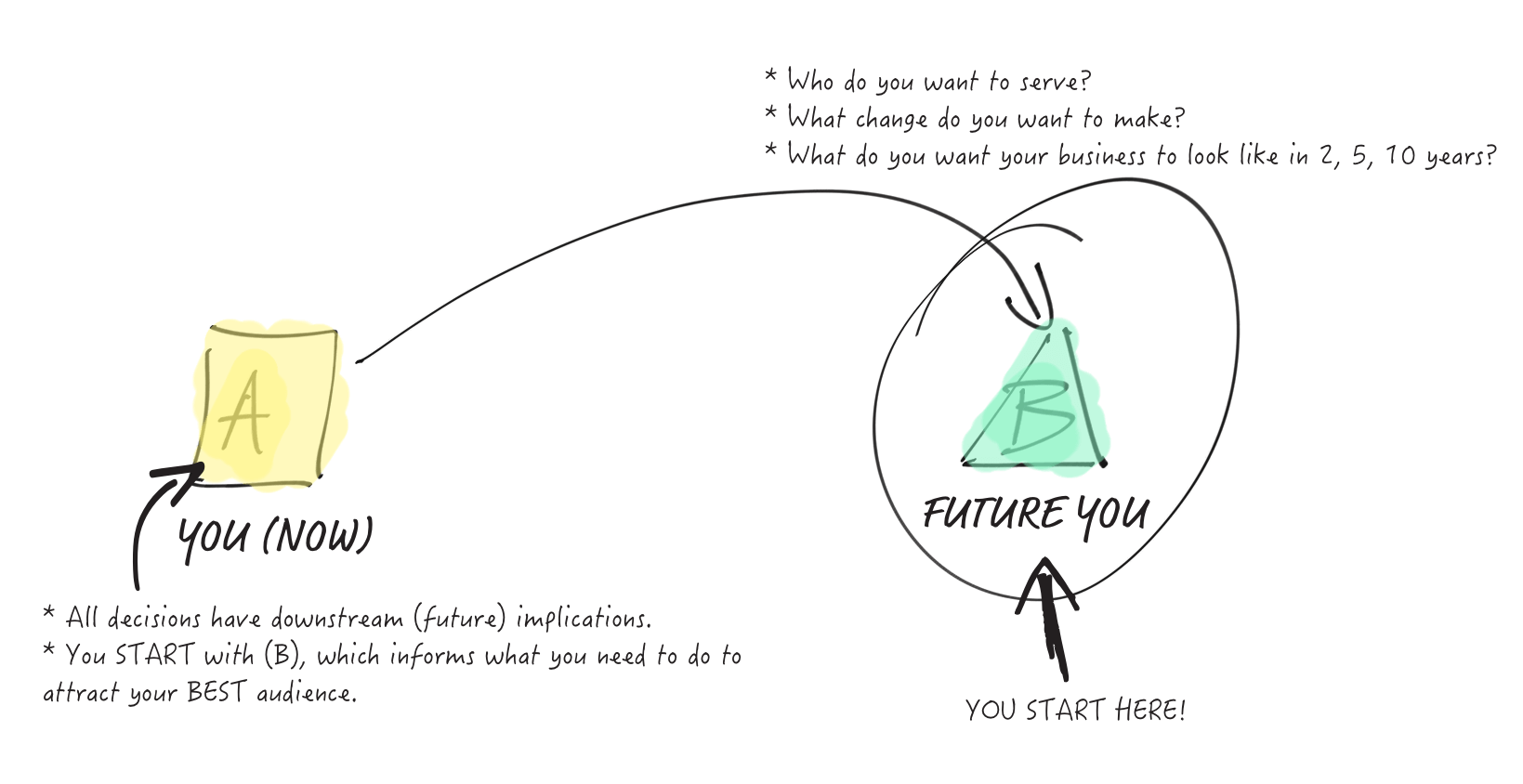 Your starting point is defining and getting crystal clear about: who you seek to serve?

This is not a trivial question. Dig deep.

All decisions have downstream (future) implications.

As I've demonstrated through the somewhat embarrassing and humbling story I've started, pricing plays a significant role in who you attract.

And guess what? That's precisely what he did.

But now the world is different. We're not in the (relatively) low-priced marketing course business anymore.

The Modern Marketing System (“The System”) combines our best thinking from more than a combined four decades of doing this work (for ourselves and hundreds of clients).

End of March we'll be releasing TLB Lab to our System customers along with Lab Elite, each perfectly catering to a smaller subset of our best audience.

Our “B” (in the above illustration) has changed, which means our point “A” (our activities and behaviors) needs to change to attract the audience we seek to serve long into this next decade.

Our site is going to change a lot over the coming months.

And if you're already inside of “The System,” you'll get to see a whole new world of opportunities opening up over 2022.