This email is part of our email series for the June 1-8 (2020) enrollment of SOI & ARM. If this resonates with you, you can find the rest of the series here. 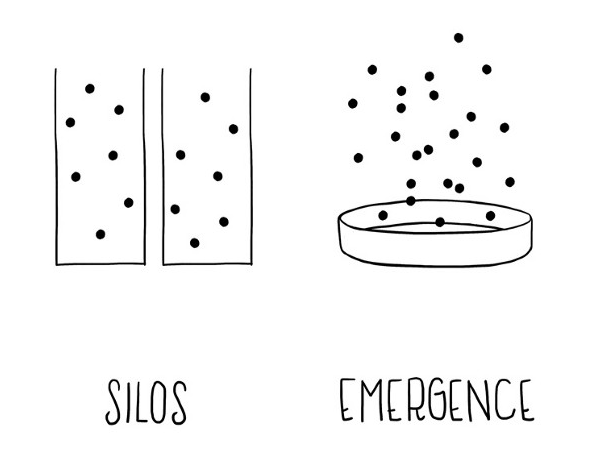 The names Amos Tversky and Daniel Kahneman may not mean anything to you.

Their work introduced the notion of cognitive biases and illusions, and their contributions to behavioral economics and decision-making have been called “breathtakingly important.”

That’s how Michael Lewis described their collaboration, which is the subject of his book, The Undoing Project (2016).

The big insight was that the work produced through their collaboration was not only completely different than either of them had done on his own, but orders of magnitude better.

In a touching, and wonderfully understated description of their work together twenty-one years after Amos Tversky died, Kahneman described their collaboration, saying:

“… we did work that was the best that either of us did over our long careers, and both of us did pretty good work, but together we were quite special…”

Think about that for a second before you move on. Allow the insight to sink in.

The focus of this email isn’t two brilliant Israeli psychologists, but the idea behind their brilliance — emergence — the outcome of the synergies of the parts interacting together.

There is untold power when we see everything as interconnectedness…

“A system is a set of related components that work together in a particular environment to perform whatever functions are required to achieve the system’s objective.” — Donella Meadows (Thinking in Systems)

When we understand and internalize this idea, we can engineer environments and situations that produce positive emergence. Instead of linear thinking, where 1 + 1 = 2, we can think in terms of 1 + 1 = 5, 9, 15 or more…

Think about this funnel flow scenario…

Jeff enters a marketer’s world from a paid ad, an affiliate referral, an organic click from a SERP, or an online article or blog post.

Jeff lands somewhere. Most likely a sales page (or a content page setup as a precursor to a sales page). In most cases, the path that leads anywhere significant will narrow the closer Jeff gets to a potential transaction.

(The term ‘funnel’ gives away the intent.)

If Jeff wants anything significant to sink his teeth into, to move closer to solving a problem he has — something beyond a blog post telling him about the problem he’s already aware of — the funnel will narrow to a gated entry point almost immediately.

“5 Easy Ways to Get Influencers to Promote Your Book”

Free Download: How to Get Your First 1,000 Email Subscribers (and Beyond)

(And, don’t forget, Jeff sees a timer at the top of the screen reminding him that he only has 8 hours, 58 minutes, 32 seconds before the offer expires — DOWNLOAD NOW, before it’s too late.)

He’s on the marketer’s timeframe, not his own. Everything is urgent (even if Jeff’s needs aren’t).

Note: all of these examples are real. In a little less than 9 hours time — if we don’t act NOW — we’ll lose this opportunity!? Fortunately, we didn’t write this email tomorrow or we would have missed out.  🙄

… and the marketing machine marches on, unfazed about any reality beyond the coercion of a sale asap.

Jeff has to decide very quickly if he will hang around and jump through some hoops with the hope of *maybe* finding something worth his time.

Most likely he’ll bounce. Or he’ll decide to buy, and refund later because he was pushed — not pulled — toward the sale.

If he does signup for whatever lead magnet, his first stop will be a sales funnel, and if he still doesn’t respond, he’ll be demoted to an email “gauntlet” (sometimes referred to as a wheel of doom, where he’ll be rotated through a never ending offer sequence until he buys something or unsubscribes, exhausted).

And that’s where the similarities end.

Jeff has entered a “world” that is different, a world that he feels like he wants to be a part of.

He reads … watches … engages … he’s sucked in like a ten year old reading Harry Potter and the Philosopher’s Stone for the first time.

Jeff is drawn in … not because he’s pushed and coerced to take an action. Instead, it’s the opposite. He’s pulled into the content, step by step. He wants to move forward. No one has to bribe or persuade him.

Some weird invisible force pulls him along … like a great movie, or a book he can’t put together. He’s drawn in, but all by his own free will.

There are no countdown timers.

No opt-ins before anything meaningful is shared.

Instead, Jeff sees the opposite.

When you get this right, what happens? You get emails like this… 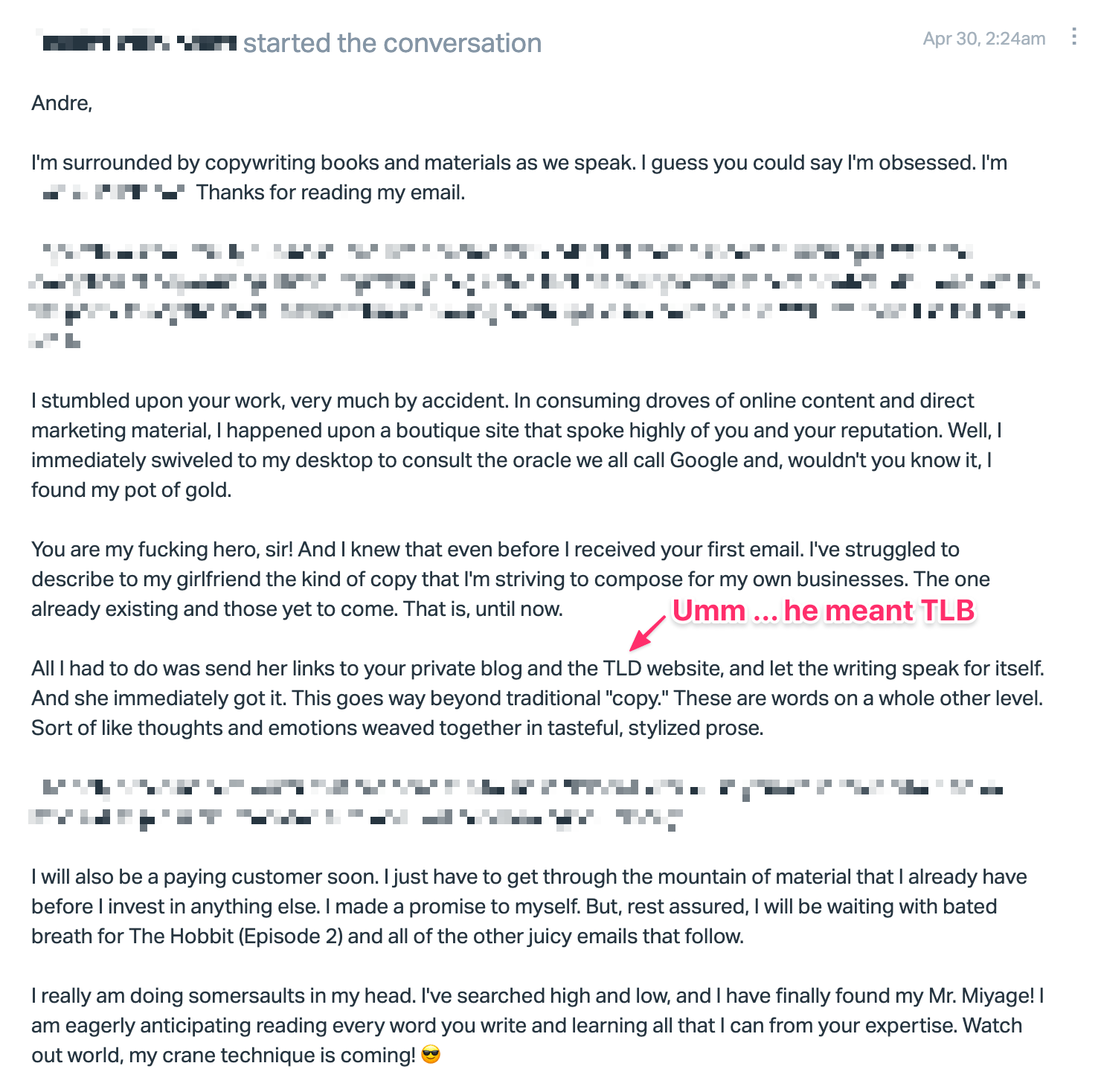 This gentleman isn’t named Jeff, but no reason why we can’t think of him as Jeff.

You’ll notice something weird near the end of the email he sent us.

“I will also be a paying customer soon.”

He wasn’t ever hit with an opt-in anywhere. He was pulled in, he had an experience that rocked his world — which he shared with his GF — then he located our contact page and reached out.

Think about that dynamic. Let it sink in.

Sue experienced a “version” of what Jeff did, but a DECADE earlier. Similar dynamic. She was pulled into our world.

She’s been on our list for a decade (through three ESP moves). She owns most of our courses. 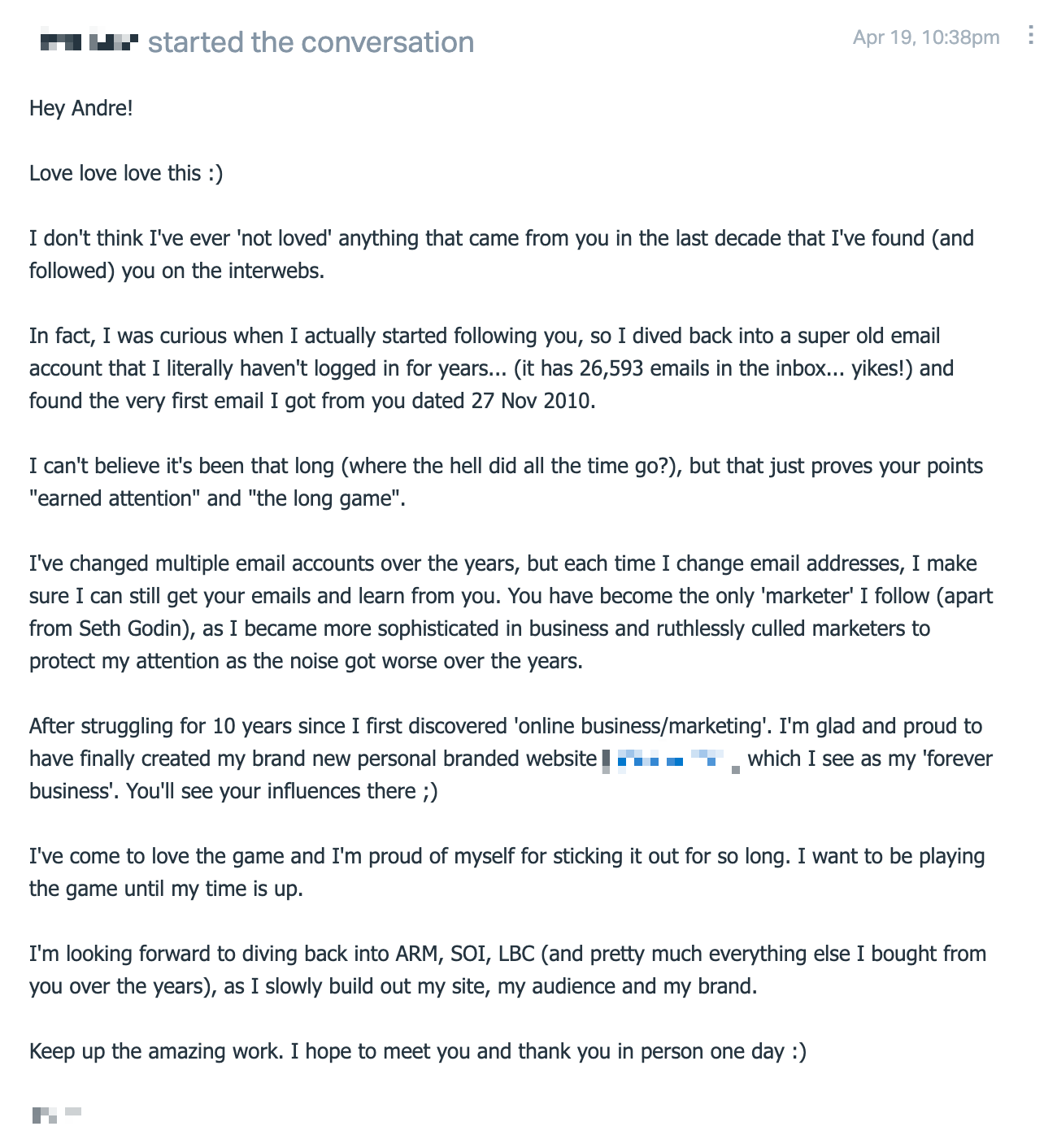 The way to get similar results for your business is through a process we call worldbuilding.

It’s a fundamental component of SOI which continues with ARM. Separately, each is powerful. But together, their results compound in unpredictable ways.

ARM uses the principles of story to build excitement and pull prospects toward an offer one beautifully crafted email at a time — no high-pressure “gauntlet” necessary.

By the way: if you have a question, or just want to share an insight you had after reading this, head to the comments section here.

If this email resonated with you, and you feel someone you know, or people you lead, will dig it too, please share this page. I would mean the world.