Was going to write an email about *overwhelm* last week, but other stuff fought and won for priority.

Have you ever felt overwhelmed?

That feeling of being overwhelmed is something we all deal with.

It phases in and out depending on how much is on our plate.

The feeling doesn’t discriminate on fame or fortune or whether you’re a “productivity” expert or Joe Nobody.

We all experience it. No one is immune.

I’ve been dealing with it lately.

Lots of shit to do. A to-do list that’s a mile long . Same limited time resource to squeeze everything into.

Sometimes it feels like playing Tetris, deciding on what to prioritize first, what to do next, what to bump down the list for “later,” if later ever happens.

Well, … how do you eat an elephant?

One bite at a time, right?

We all know the saying, but we often fail to apply this lesson in our lives.

From my perspective, it feels like I’m wrangling a herd of elephants. It’s like been back in South Africa.

Lately: one of my big elephants has been ARM4 (still is).

(ARM4 is the 10 Year Anniversary Edition of AutoResponder Madness, although it’ll be 11 years if it’s released in 2020.)

I had decided to create it from scratch instead of just “upgrading” ARM3.

From a blank page with that damn blinking cursor.

It’s going to be great once it’s done, but getting to anything close to *done* was been challenging.

The trick I’ve found, for me anyway, is to break down goals or tasks that are too big or broad, into small (tiny) goals.

Create ARM4 is a goal. It’s a big elephant. Impossible to eat.

So one of my first tiny goals was to mind map it. That’s it. Simple enough.

Once it was mind mapped (a huge mind map), I started to tackle each node (lesson): one at a time.

But that didn’t work.

The “scope” of each lesson was still too broad. Like a rabbit hole, I would get lost down there for days; even weeks at a time.

So I had another idea.

I recreated the mind map, this time simpler (minus all the depth and nuances).

I then put a length constraint on each node (lesson).

Same question as before: what is the 80/20 of this one lesson? This prevented me from going down rabbit holes.

And this has been working amazingly.

With some luck, I will FINISH the 80/20 edition of ARM4 end of this month.

I then plan to RELEASE this 80/20 beta edition to current ARM customers (who all get it for free: yay!).

There’ll be a discussion component attached to each lesson (feedback loops).

I’ll then start all over. This time blowing up each 80/20 lesson, adding in all the depth and nuances (and feedback).

If you’re a current ARM customer, you’ll be getting early access to ARM4, prob’ly some time in November.

I’ve decided to do something kinda weird…

The 2nd Edition of ARM, the edition that put ARM in the map, so to speak, is still relevant today, nearly ten years later.

Go figure, huh? This is because ARM is heavily principles-based, not based on ever-changing tactics and hacks.

This is the same version that Digital Marketer modelled when they decided to implement ARM throughout their organization: 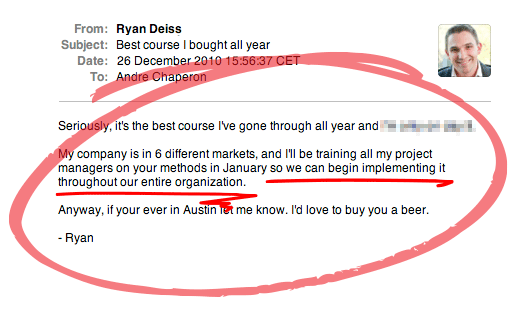 As I was uploading this email to ConvertKit, I noticed it was reporting that my account-wide average open rate is 61.37%.

I’ve not read these in years.

They have put a goddamn smile on my face. 😎

I’ll have ARM2 locked-and-loaded for *anyone* to join, for free, later this month.

That’s all I have for now.

Have yourself a badass weekend!

I few weeks ago I mentioned that my favorite non-marketing email newsletter, is Morning Brew.

It’s published by Kevin Kelly (and his team), the founding executive editor of Wired magazine.

It covers all sorts of little life hacks: many of which are weird or creative.

We ordered a kitchen kettle a few weeks ago from this recommendation (yeah, I know, a damn kettle!). In the email it said this, and I quote:

“To heat the water, I’m using a Cosori Electric Kettle ($30). It’s made from borosilicate glass and has a stainless steel bottom. No plastic touches the water. A half liter of room-temperature water starts to simmer in a minute, and comes to a full boil in under two minutes. It shuts off automatically.”

If you enjoy stuff like that, you’ll dig Recomendo.

Next time I’ll share another non-marketing newsletter that I love. It’s so good. Will share next time.